Jind the popular district of Haryana, has an array of tourist spots. It is very diverse and what attract tourists to Jind are its monuments, religious places and historical sites. Different location has its own historical importance and plays an imperative role in the history of Jind. Tourists from all over the Country come to Jind for tourism purposes.

The name of the district is derived from Jayanti Devi temple. Jayanti is known as the goddess of Victory. During the rule of Pandavas it is said that they built a temple to honor Jayanti goddess.

It is around this temple that the district of Jaintpuri came into existence. The temple is located 15 kilometers from Chandigarh in Ropar district of Punjab.

Construction of the Jayanti Devi Temple

The story about the construction of temple dates back to 550 years. During the rule of Mughals, the King had 22 brothers and one of the brother’s was married to the daughter of the King of Kangra. She was an ardent follower of Mata Jayanti Devi and used to pray to the Goddess every day. Once the princess’s wedding was fixed she was very upset that she could not see the Goddess everyday and worship her. She constantly prayed to Goddess and she appeared before her in a dream. The Goddess conveyed to her that she would always accompany here wherever she went. 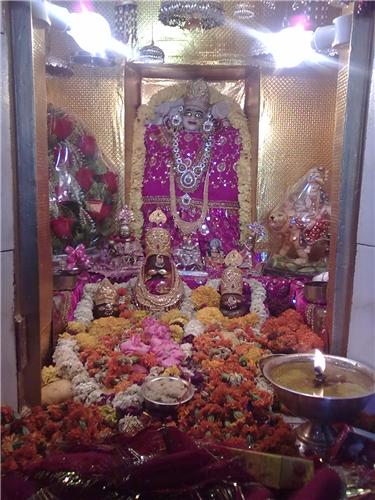 After the marriage ceremony, she was escorted in her Doli to Hathnaur. On the way the Doli became extremely heavy and the King’s men could not carry the Doli. Once the princess conveyed her dream to her father, the King sent the idol of the Goddess with his daughter. To commemorate the faith of the princess, a temple was constructed on the hillock by the king of Hathnaur. The natives of the district started worshiping Goddess Jayanti Devi.

The devotees enter the temple through a huge gate and there are over 100 steps to climb to reach the temple. The main sanctum of the temple has the idol of Goddess Jayanti Devi. The temple also has idols of other Gods such as Shiva, Ganesh, Laxmi and some local deities. The period when the temple receives maximum visitors is during the grand fair festival, celebrated on full moon day in February. A festival on a smaller scale is arranged in the month of August. During these festivals, the temple receives around 1.5 lakh visitors.

The temple still continues to receive devotees from all across the global. The atmosphere around the temple is extremely serene and pious. The only noise that can be heard around the temple is rustling of leaves and the humming of birds. A well dug during the ancient times, is found at the pedestal of the temple and provides saccharine water all through the year. The goddess is known to hear and answer the prayers of all the devotees.

How to Reach Jayanti Devi Temple

Jind is 125 kilometers from Delhi and there are over ten direct trains from Delhi to Jind. A number of buses also ply to Jind from Delhi. Hence travelling to Jind is very convenient. One of the most famous tourist spots of Jind is Jayanti Devi Temple.

Explore more about About Jind